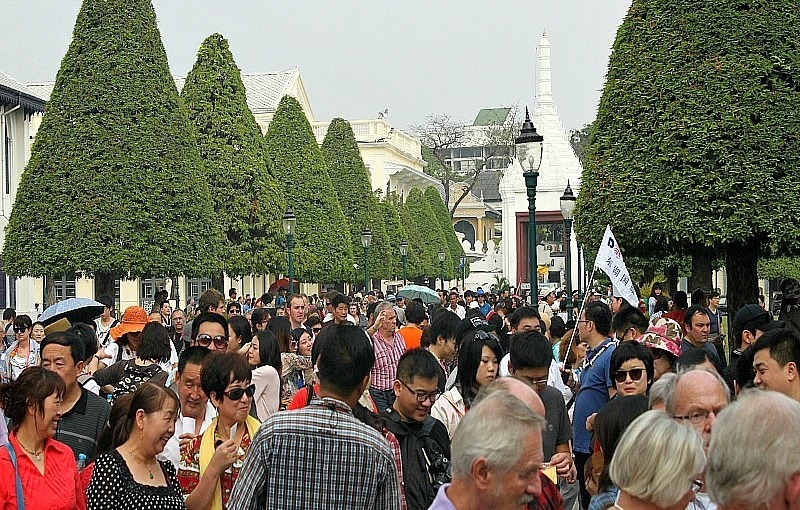 I’ve heard mixed reviews from friends about their visit to Bangkok. Here was our take.

What we hated about Bangkok

The old district was filled with beautiful palaces, temples, and markets – some of which took our breath away. Most of the time however we were cramped in huge queues and packed walkways. Traffic was so bad that it took 1-hour to get from place-to-place by taxi, when it should only have taken 15 minutes; leaving us to decide whether to walk for an hour or sit in traffic for an hour. Lose / Lose.

To kick a tourist when they’re down, scammers made sure we missed out on some great sites – literally. We have traveled A LOT and by now are used to avoiding 10X overpriced cabs or tuk-tuks (thank god for Uber, BTW). We’ve heard the let’s-be-friends-and-shake-hands gag, that precludes trying to sell an overpriced tour, a million times before. Those typical tourist traps didn’t bring us down.

We were caught off guard, however, when locals (dressed up like staff at the gates of each site) said, “You can’t get in with those clothes”, or, “The temple is closed for a service for two hours. Come back later.” We were wearing shorts and read that some temples don’t allow that type of attire. We thought, why would a scammer turn you away instead of offering a tour? So, we assumed it was all legit.

Our red flags started getting raised when the warnings were followed up with a helpful rundown of what is open in the area and ended with the classic, “I’ll show you around for 100 Baht” – plus 200 Baht for this and 500 Baht for that. We thought they were just workers just trying to make an extra buck – no biggie. We told them, “no thanks” as we started rearranging our schedule around what we were told were unavailable sites. We would have missed out on these sites completely had it not been for the fact that we walked up to the “REAL”  entrance accidently and saw a bunch of people in shorts getting in. WTF?

Turns out, not only were the temples open but you could borrow garments to cover improper clothing for free. The best scams are filled with a bit of truth, right? What a shitty thing to do: turn tourists away from sites just to get them to take a tour instead. It seemed like everywhere we turned people were using this gag, and it felt like the last straw. Or maybe it was the last straw when a local got cursed at us after we ignored him when he tried to use the, “you can’t get in, ride with me instead!” line on us as he followed us down the block.

What we loved about Bangkok

We really have a new appreciation for why people find Bangkok so polarizing. On the nights we avoided the old town area we really enjoyed ourselves. Not only was our hotel suite only $50/night, but it was located in a modern and trendy area. Our hotel offered a free tuk-tuk to the nearby market (and since it wasn’t as congested where we stayed the ride took minutes, as expected.) We had amazing 1-hour Thai massages for $5.50. Our 1-hour cab rides were $4 on Uber. The nearby night market was reasonably quiet and enjoyed great food for about $1.50 a plate.

We were surprised by just how modern the downtown areas were. Every few stops on the metro line (which cost $0.50-$1 per person) had 9-story malls filled with gourmet restaurants, bakeries, and chic retail stores. You won’t get jaw dropping prices in these areas. As a matter of fact, some places were as expensive or more expensive than they were back home, but everything was so close to one another you could easily choose between a great budget meal at a street vender or a gourmet pastry in the mall.

Asiatique, although touristy, was another cool outdoor shopping mall. Again, it was filled with high priced items, but it felt like a place you’d be happy to visit back home and we found that to be a nice break from the chaos.

Why is Bangkok So Polarizing?

As you can read above, it dramatically depends on where and when you decide to visit sites and where you choose to stay in the city. I’d suggest beating the rush by getting through the temples in the old part of town super early, and read up on where the entrances really are, what dress codes are required-ish, and the day’s opening hours, so you can’t be easily duped. Walking around with headphones may even help you avoid the cacophony of honking sounds and the hoard of locals trying to take advantage of grabbing your attention.

Then, be sure to relax in the parts of town away from the chaos and position yourself to easily walk from spot-to-spot before grabbing a cab in a lightly populated area. Also, go into Bangkok willing to accept that you will always be duped out of $1-5 per transaction. If you go in (and budget) with that mentality, instead of thinking in percentage (e.g. “they charged me twice as much as they should have!”) it will sting far less.

In an effort to practice what I preach  I counted down from ten to my initial reaction to this video from the Arizona Mosque Protest. I then re-constructed my reaction into this:

I’m glad we give freedom of speech to all. I’m sad they chose to use it the way they have. Im glad people showed up to use their free speech to show their love for their fellow citizens in the face of hate. I’m glad we have good Police like those to allow both sides to express themselves without escalation. I’m glad people did not resort to assuming everyone there is a thug. I don’t believe these people represent all whites or that whites need to explain themselves because of these people. I will try to be consistent in these views no matter the situation. I understand these protesters are scared and have had no help to cope with their fear as a community. That fear/ignorance is all of our faults and we should reach out to them to close the gap between their fears and their fellow humans.

I saw this article posted by a friend on FB by Scott Weiss a VC at Andreessan Horowitz called Success at work, Failure at home.

To me pulling back the curtains behind a life, relationship or personality allows us to see the truth: that there is no such thing as the “perfect life” to aspire to. Instead we are all simply working hard on the goal of being the best people, friends and mates we can be. So don’t be so hard on yourself, learn a little, and share a lot.

With that in mind his post inspired me to post this learning from my own life as a serial startup/”entrepreneur guy” in a relationship.

Why You Can’t Optimize for Intimacy

The style of conversation that helps drive interaction, trust, and motivation within a business and its employees doesn’t translate completely with a person you have an intimate, loving, sensual, and sentimental obligation to.

Some things do translate well. For instance, the patience and even keeled temperament required to maintain a level of respect and openness is important to both work and home lives. On the other hand the levels of distance and tone you employ can have a stark difference between the two environments.

As an example, working on an emotional issue with a significant other doesn’t work well with checkins, progress updates, and check lists (which can be cold to a person you sleep next to every night.) While on the other hand focusing deeply on emotions doesn’t work well when communicating clear objectives and goals with peers and employees (that you hopefully don’t sleep next to – ever.) Again, there is some overlap, but the differences are monumental.

For me, being a startup guy in a relationship is a constant lesson in understanding those differences; not focusing on “optimizing” for your relationship but simply nurturing it together.

So in short as the title says: do not optimize for intimacy. And I know if you are a startup person you are thinking right now “I disagree, of course I can if I just…” Stop right there. I know you “can” – but don’t. — I know you think you can – but don’t! The other person may be feeling more focused and diligent (yay!) for now, but probably feeling less connected, heard, loved, or nurtured over all. Even worst they may be feeling like they are at work – and not in a “intimate relationship.” (boo!) :-p

I love science because it presents us with facts and explains systems that surround our life, I love philosophy because it brings meaning to it, and I love love because it reminds us how unimportant both can be.